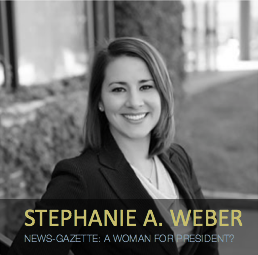 What might change if this year, on November 8th, the United States of America was to have our country’s very first Mrs. President?

The News-Gazette sought out ten local women of various ages and roles, and featured their insightful perspectives on the differences and opportunities they think would come out of a female becoming President, either in this election or the future.

Spiros Law, P.C. attorney, Stephanie Weber, was one of the local women featured. She voiced, “It is my hope that when we have a female president, she is not viewed as being different or governing ‘as a woman,’… She should be defined by her unique talents and not by her biology. It is to everyone’s benefit that we select the best leaders without regard to gender.”
– Attorney, Stephanie Weber