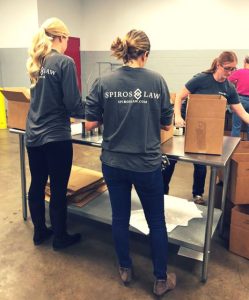 Partner Miranda Soucie was crowned Prom Queen at the annual Eastern Illinois Prom fundraiser after raising $11,325.00 in donations. The event was a huge success with a record breaking $75,000.00 raised from this year’s Prom Court and a total of over $140,000.00 raised for our community. The annual Eastern Illinois Foodbank Prom Benefit helps raise money for the estimated 77,000 adults and 39,000 children in our local community that seek help from programs supported by the EIF every year. The EIF supports all of East Central Illinois, including Champaign, Coles, Douglas, Piatt, and Vermilion County.

Miranda’s effort to raise funds for the Eastern Illinois Foodbank has inspired the rest of the office to step up as well by donating some time to help at the food bank. This week Spiros Law employees met at the food bank to help label and repackage donated food, so it could be distributed to the EIF’s network of food pantries, soup kitchens, shelters and other emergency feeding programs.

The entire team at Spiros Law, P.C. is proud to help with this great cause, and we highly encourage all of our friends and family in the community to join in and donate!

Categories: In the Community